Cardinal O’Malley to Present Historic Honor to American Rabbi on Behalf of
Pope Francis in Ceremony on November 20 at University Campus, North of Tampa 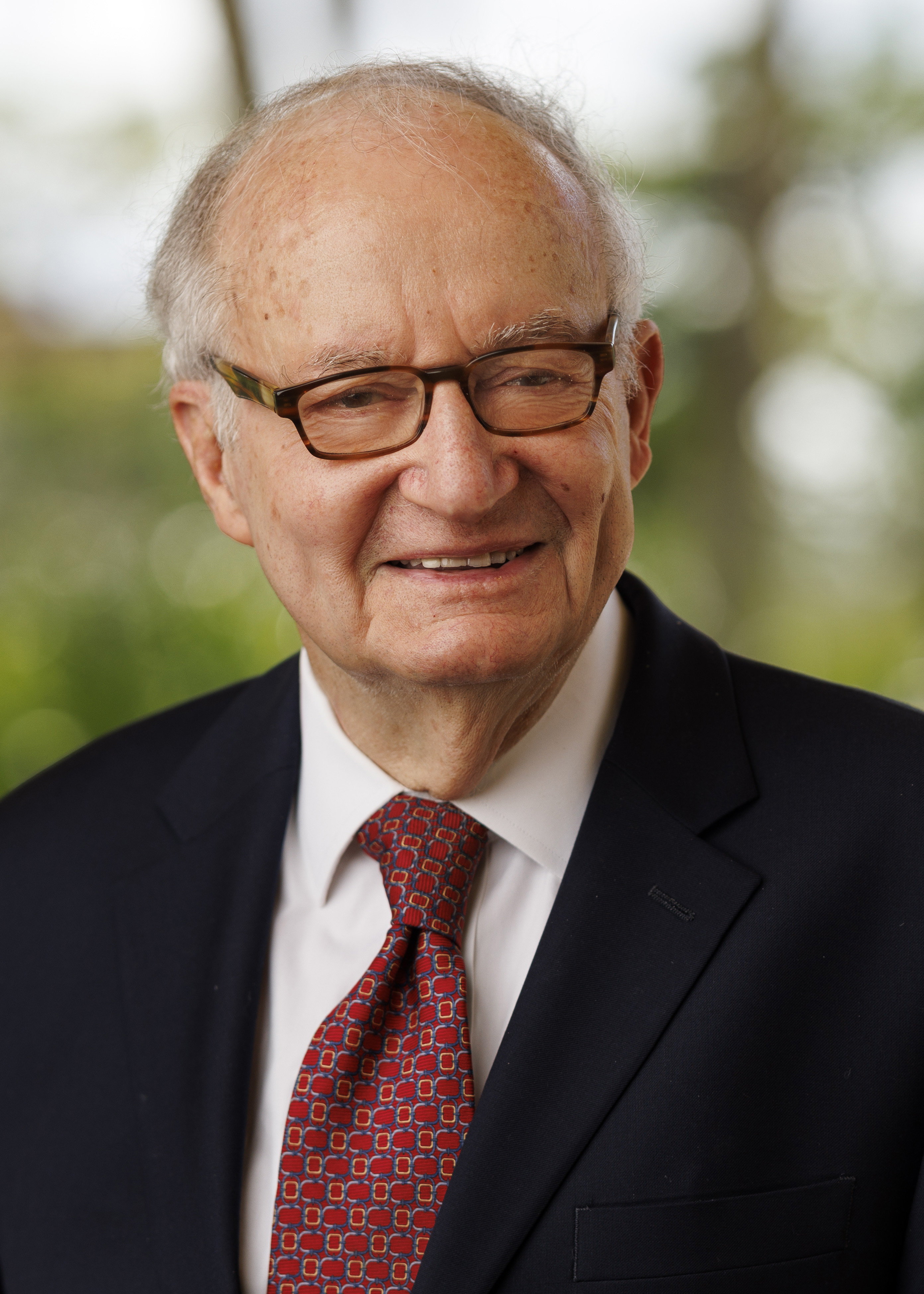 ST. LEO, FL – For only the third time in history, a pope is honoring an American rabbi with the Papal Knighthood of the Order of St. Gregory the Great. This also marks the first time in his papacy that Pope Francis is granting the honor to a Jewish person: Rabbi A. James Rudin, co-founder of Saint Leo University’s Center for Catholic-Jewish Studies (CCJS).
Pope Francis will recognize Rudin for his decades of work in building positive Catholic-Jewish relations throughout the world, fostering interreligious dialogue and understanding. Rudin is the American Jewish Committee’s (AJC) senior interreligious adviser, having previously served as its Interreligious Affairs director. He also is a distinguished professor of religion and Judaica at Saint Leo University, in addition to establishing the university’s Center for Catholic-Jewish Studies.

Investiture Ceremony
At 1 p.m., Sunday, November 20, Cardinal Sean Patrick O’Malley, OFM, of the Archdiocese of Boston, will represent Pope Francis and conduct the investiture ceremony at Saint Leo University. The public is invited to this historic event, which will be followed by a dessert reception at 2 p.m. in the university’s Wellness Center, 33701 State Road 52, St. Leo, FL 33574.  Reservations are required. RSVP for the investiture ceremony here (https://calendar.saintleo.edu/event/6325-honoring-rabbi-a-james-rudin-with-the-papal). Parties of six or more should contact Dr. Matthew Tapie, director of Center for Catholic-Jewish Studies, at matthew.tapie@saintleo.edu.
The ceremony also will be available via livestream at saintleo.edu/papal-knighthood.
“For more than 50 years, Rabbi James Rudin has worked to advance Catholic-Jewish relations, and interfaith relations on a wider scale, with extraordinary skill, dedication, and success,” O’Malley said. “The Catholic Church was particularly blessed by Rabbi Rudin’s many years of close working relationships with Cardinal John O’Connor in New York and Pope Saint John Paul II. We are all blessed by Rabbi Rudin’s achievements in promoting dialogue and collaboration among communities of different faiths. The impact of this work continues to grow as successive generations build on the foundation Rabbi Rudin has established.
“I am honored to be able to present the rabbi with the papal honor bestowed by Pope Francis, a most deserved recognition and tribute,” continued O’Malley, the Archbishop of Boston. “We are grateful to Saint Leo University for generously hosting Rabbi Rudin and all who will gather for this recognition of his dedication to bringing people together in the name of the Lord.”
Rabbi Eric J. Greenberg, director of United Nations Relations and Strategic Partnerships for the Simon Wiesenthal Center, has worked with Rudin in the field of interfaith relations for more than 25 years. He noted that the papal honor, “comes at a crucial time when Jews are under assault around the world, and this knighthood clearly demonstrates the evolving positive relations between Catholics and Jews. Rabbi Rudin well deserves this historic, international honor."

Dedication to Dialogue
Rudin, of Fort Myers, FL, is a prominent author and public speaker, and an international leader in interreligious relations. He was born in Pittsburgh and grew up in Alexandria, VA. He attended Wesleyan University and graduated from George Washington University with academic distinction. Rudin received his rabbinical ordination from Hebrew Union College-Jewish Institute of Religion (HUC-JIR), and served as a U.S. Air Force chaplain in Japan and Korea.
His most recent book, a memoir published earlier this year, The People in the Room: Rabbis, Nuns, Pastors, Popes, and Presidents, tells of his travels and meetings with leaders as well as community members throughout the world.
He was a member of the Camp David Presidential Retreat Chapel Committee and co-founded the National Interreligious Task Forces on Soviet Jewry and Black-Jewish Relations. Rudin met many times with Pope John Paul II and Pope Benedict XVI and was the guest of honor at the 1994 Vatican event commemorating the Holocaust.
"The Bishops' Committee on Ecumenical and Interreligious Affairs of the U.S. Conference of Catholic Bishops rejoices that Pope Francis will confer upon Rabbi A. James Rudin the Papal Knighthood of the Order of Saint Gregory the Great,” reads a statement from the USCCB. “We give thanks for the many contributions Rabbi Rudin has made to deepening ties of friendship between Jews and Catholics. It is our hope and prayer that the example of his dedication to dialogue will help to bring Catholics and Jews across the nation even closer together."

Founding the Center for Catholic-Jewish Studies
The importance of that interchange of ideas prompted the formation of Saint Leo University’s Center for Catholic-Jewish Studies in 1998. Rudin said he first heard of the then-Saint Leo College in the 1970s when his wife, Marcia’s, stepmother, Dr. Barbara Kaplan, taught music at the college. “She said Saint Leo was a fine small college,” Rudin said of the university that now is one of the largest Catholic universities in the country. “She and my father-in-law, Dr. Max Kaplan, lived in Tampa, and she commuted to the campus. Fast forward to 1998 when I noted that Florida had an increasing population of Jews and Catholics, and that dynamic demographic trend was likely to continue. There was no Christian-Jewish academic center south of Baltimore at that time.”
Rudin met with the then-college president Arthur Kirk Jr., who liked the rabbi’s proposal of creating an interreligious center on campus. Kirk, Rudin, and Bruce M. Ramer, then-president of the American Jewish Committee, signed a joint statement establishing CCJS.
As the college grew and became a university, the late Bishop Emeritus John J. Nevins of the Catholic Diocese of Venice (FL); and now Bishop Emeritus Robert Lynch of the Diocese of St. Petersburg (FL) became co-founders of CCJS. These leaders recognized the need in the state for an academic center devoted to the biblical and theological study of Catholic-Jewish relations and interreligious dialogue, as emphasized by the Second Vatican Council.
Today, the CCJS is a leading academic center for the study of Catholic-Jewish relations. While it started as a stand-alone, lay-driven- and financed project at Saint Leo, it became fully integrated into the university in 2013 and will celebrate its silver anniversary—25 years—in 2023, Rudin said.
Now, Rudin’s commitment to forging understanding between the two traditions is being recognized by Pope Francis in the awarding of the Papal Knighthood of the Order of St. Gregory. The papal knighthood was created by Pope Gregory XVI (1745-1846) in 1831, and named in honor of St. Gregory the Great, who died in 604, and whose writings greatly influenced the Church.
The Papal Knighthood of the Order of St. Gregory is the highest honor the pope bestows upon individuals, both Catholics and non-Catholics, in recognition of their significant contributions to society. Rudin, through his work building respect and understanding between Catholics and Jews, exemplifies this.

-30-
About Saint Leo University
Saint Leo University is one of the largest Catholic universities in the nation, offering 62 degree programs to more than 15,800 students each year. Founded in 1889 by Benedictine monks and sisters, the private, nonprofit university is known for providing a values-based education to learners of all backgrounds and ages in the liberal arts tradition. Saint Leo is regionally accredited and offers a residential campus in the Tampa Bay region of Florida, 16 education centers in five states, and an online program for students anywhere. The university is home to more than 100,000 alumni. Learn more at saintleo.edu.